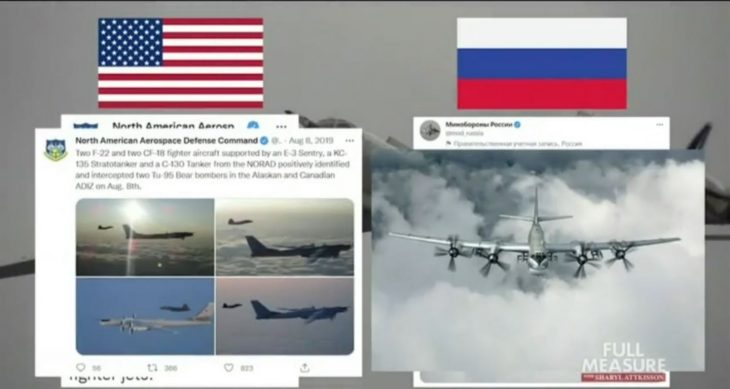 The U.S. Coast Guard is on the front line of the rivalry between the United States, China and Russia. Under the direction of the Department of Homeland Security (DHS), our Coast Guard is responsible for executing the Coast Guard Arctic Strategy. One of their duties is patrolling the roughly 1,700 mile maritime boundary line that runs over the Bering Sea. This maritime border (between Russia and the U.S.) is where a struggle for strategic Arctic resources is taking place. In addition to competing for oil, gas and fishing grounds, both Russia and China are interested in developing new faster shipping lanes between Asia and Europe.

Russian Patrol Ships and Chinese Warships in the Arctic

Tensions in the Arctic are increasing dramatically as Russia is rebuilding old Soviet bases and sending troops, ships and nuclear subs to the area. In August of 2020, (while on the American side of international waters), commercial fisherman David Anderson was instructed by Russian aircraft to leave the area. Anderson contacted the U.S. Coast Guard and our Coast Guard instructed Anderson to “obey them“.

The U.S. Coast Guard is not alone in patrolling our maritime boundary over the Bering Sea. In April of 2020, our U.S. Air Force scrambled F-22 stealth fighter jets to intercept Russian patrol aircraft near Alaska. In August of 2021, the U.S. Coast Guard shot pictures of four Chinese warships sailing in America’s Exclusive Economic Zone (EEZ) near Alaska’s Aleutian Islands.

Many U.S. Coast Guard ships, planes and helicopters are hand-me-downs from the U.S. Navy. For example, the 110′ cutter, Chandeleur is a 33-years old boat which is far beyond its 20-year life expectancy. In the case of (much needed) ice-breaker ships, our Coast Guard has only two while Russia has dozens. Watch Sharyl Attkisson as she reports on the dangerous conditions that our Coast Guard operates in while protecting two of our biggest industries, oil and fishing.