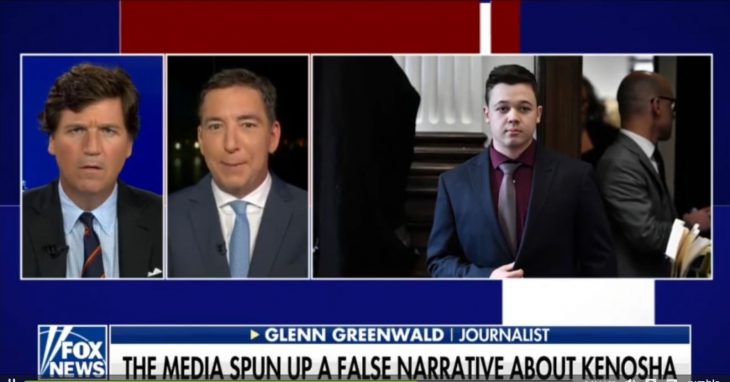 The verdict is in. Kyle Rittenhouse was found not guilty of murdering two men and wounding another during the 2020 BLM riots in Kenosha Wisconsin. Yet, while all 4 men involved in the incident were white, CNN and MSNBC continue to portray Rittenhouse as a “white supremacist”. They even have called him a “domestic terrorist” and a “vigilante”. American news media are so biased against Rittenhouse that international media outlets followed suit. Britain’s ‘The Independent‘, a Dutch newspaper and Brazil’s 3 biggest media organizations initially reported that Kyle Rittenhouse had shot 3 black men. MSNBC went so far as to send a producer to trail a van that was transporting the jury from the courthouse. (That action resulted in Judge Bruce Schroeder banning MSNBC from the courthouse completely.)

So, why did America’s media try to convince us that this was a race crime and not about self-defense ? Watch as Tucker Carlson shows clips of reporting by MSNBC and then interviews independent journalist Glenn Greenwald

One of the questions Tucker Carlson asked Glenn Greenwald is why is the media telling us (and the world) that this is a race crime when it involves 4 white people. Tucker told Greenwald “It seems like an intentional effort to divide the country along color lines (to me).” To which, Greenwald replied:

It really is the case that the liberal left of the United States has completely lost the capacity to understand any significant event in the world without seeing things through a prism of race. Everything is racist. Everything is white nationalists. Everything is white supremacists. Everyone with whom they disagree is guilty of all of those things. So, even in a case where (honest) race has nothing to do with it. It was a white person who shot three white people. All of whom did some sort of aggression against him. They still end up imposing it because it’s the only way they can understand the world. And by doing that, they gain a lot of power. They get people to think they’re on the right side of history by always agreeing with them.

At the end of the interview, Carlson and Greenwald are in agreement. It all comes down to power. And this is why we have rioting and anarchy in America.