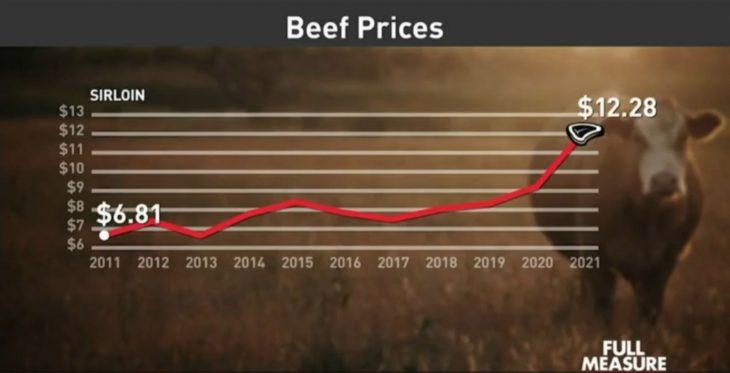 What is going on? It’s not the cattle ranchers who are getting rich selling U.S. beef. 4 meat packers are making all the money. Together, Cargill, JBS, National Beef and Tyson control 80% of the market. Two of these meat packers are in Brazil. Unfortunately, (for consumers of U.S. beef), loopholes in country of origin labeling rules, don’t make it clear where our beef is coming from. Some beef from foreign countries is blended with U.S. beef and then packaged in Styrofoam containers that are labeled ‘Made in the USA’. The consumer of that beef has no way to know that it is actually beef from countries like China and Brazil.

WATCH this clip from Full Measure with Sharyl Attkisson as Lisa Fletcher interviews cattle ranchers from Oklahoma to get the real story on the U.S. beef industry.

The Truth Behind the U.S. Beef Industry

Since 2015, corporate packers’ gross margin has ballooned from an average of $100 to $200 a head to well over a thousand dollars a head. Packers have enjoyed unbelievable profits harvesting around 120,000 head per day while cattle ranchers go out of business and consumers pay double or even triple at the meat counter.