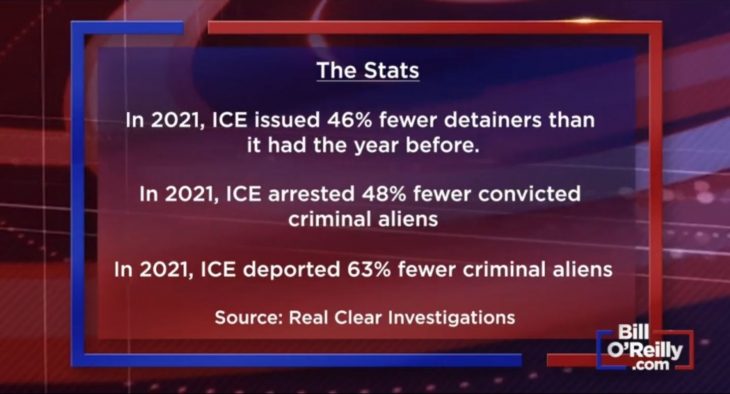 Another 30,000 Guatemalan migrants are about to illegally cross the US-Mexico border. Meanwhile, President Joe Biden is doing nothing to stop it. And our corrupt corporate media is ignoring it. The latest stats that O’Reilly presented are staggering and they are not being reported on mainstream media. In 2021, ICE issued 46% fewer detainers then it had the year before. In 2021, ICE arrested 48% fewer convicted criminal aliens than the year prior. And in 2021, ICE deported 63% fewer undocumented criminals than the prior year. (This data comes from Real Clear Investigations and the prior year was under President Trump.)

Watch the clip below as Bill O’Reilly tells his viewers that “it’s inexplicable why a President of the United States would invoke an open border policy. … And now the Department of Homeland Security tells us this week they’re gearing up for another flood of migrants into the USA this spring, and there are 30,000 of them already gathered in Guatemala about to make the trek up here. What’s Biden going to do about it? Nothing.”

O’Reilly closes the segment saying “But this is one of the biggest derelictions of duty I have seen. … Nobody has done this, and yet silence from the corporate media. Awful.”

You may remember Bill O’Reilly as the political commentator who discussed current events and controversial political issues with his guests on the “O’Reilly Factor” (on Fox News). O’Reilly now delivers unbiased news on his own platform BillOReilly.com. Becoming a premium (or concierge member will give you access to news that you will not find elsewhere. (Note: That is not an affiliate link. I’m sharing this info because I trust O’Reilly’s ‘No Spin News for data I can rely on. )