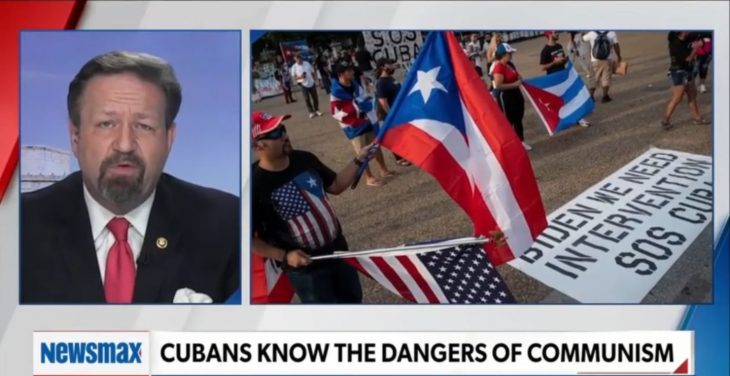 “Is our war with totalitarian ideology over?” That was the question posed by Sebastian Gorka in his opening statement on the August 8th episode of ‘The Gorka Reality Check’. (Note: Examples of totalitarian ideologies include Fascism, Nazism, and Communism.)

Gorka then ran the video from President Ronald Reagan’s 1975 Mike Wallace interview on ’60 Minutes’ when President Reagan warned us “If fascism ever comes to America, it will come to us in the name of liberalism.” There’s more. In this 14-minute clip, you will watch as Patrisse Cullors, (co-founder of the Black Lives Matter Global Network Foundation), admits that she and Alicia Garza… “We are trained organizers. We are trained Marxists“. Gorka continues by exposing the truth about what is happening in Cuba now and the reality of Communism in Cuba and the threat of Communism to America,

Representative Devin Nunes (R-CA) wrote ‘Countdown to Socialism‘, a book about politics inside the United States. Nunes explained that he wrote the book leading up to the 2020 election. In ‘Countdown to Socialism‘ , Nunes describes the media as the propaganda machine for the Democrats and Big Tech as censors for them. Nunes specifically refers to the Hunter Biden “laptop from hell” as an example of blatant censorship by the big tech oligarchs.

Prior to ending his interview, Sebastian Gorka asked Devin Nunes “Was there a conscious decision by the likes of Schumer, Pelosi, Biden (when he was compos mentis) to take the Democrat party down this socialist, radical, proto-Communist path or was it the case (like the Revolution in Russia in 1917?” … “Explain to us how Socialism came to America Congressman.” Representative Nunes’ answer was that what is happening in America is Neo-Marxism. In his explanation, Nunes questioned if billionaires and governments are funding this movement, particularly as it relates to energy and the environment. Nunes then ties this into what is happening in California now.