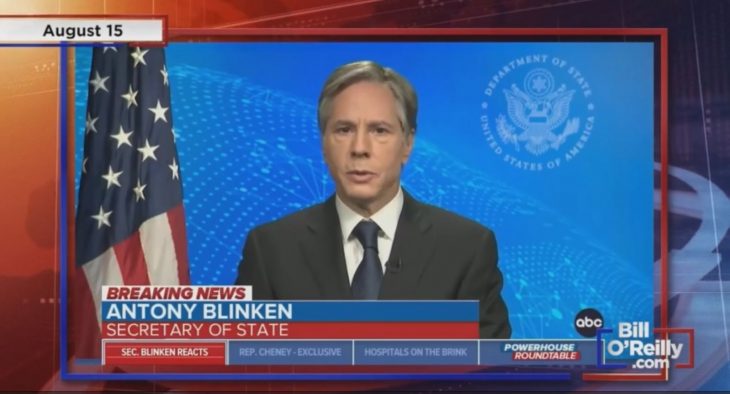 The catastrophic scenario that is unfolding in Afghanistan should never have happened. Under the Trump administration, the “Contingency and Crisis Response Bureau“, had a contingency plan that provided for the safe and quick evacuations of Americans. Pentagon advisors had recommended that President Biden leave up to 4,500 troops in Afghanistan. So, why did the Biden administration, under the leadership of Secretary of State Antony Blinken, pause that bureau? Why did President Biden fail so miserably at safely pulling American troops from Afghanistan?

Why were more than one thousand Isis criminals allowed to be released from Afghanistan prisons? Why were billions of dollars of U.S. ordinance abandoned only to fall into the hands of the Taliban? Why are thousands of Americans and Afghans (who once worked for the U.S.) trapped in Afghanistan? Did President Biden cause this crisis because he’s inept and suffering from dementia or was the Taliban takeover a deliberate foreign policy strategy by the radical left?

This 8-minute video clip of member-only, premium content (from Bill O’Reilly’s ‘No Spin News‘) should shed light on the answers to those questions.

The Threat to Our National Security

As we watch this humanitarian crisis unfold, we learn more about how and why this happened. One thing that I’m not seeing discussed much is the threat to our national security. What is going on in Afghanistan is a foreign policy disaster that is solely the responsibility of the Biden administration.

As the United States of America is pulling out of Afghanistan, the People’s Republic of China is embracing the Taliban as Afghanistan’s new government. China’s intention is to extract rare earth elements from Afghanistan. This is a national security threat to the U.S. According to Former Assistant Secretary of Energy John Shaw, “rare earth elements are an essential, critical part of the United States’ security apparatus.”

(FYI -If you’re interested in becoming a premium member of BillOReilly.com, you can join here. (Not an affiliate link.)