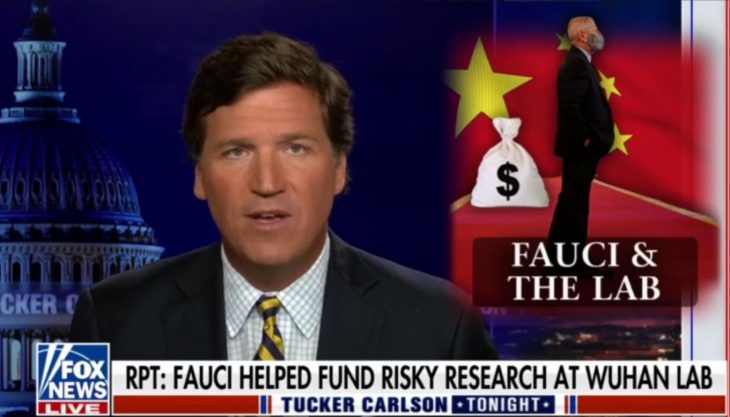 There continues to be two prevailing theories about the origin of the Covid-19 virus. There’s the original “wet-market” theory and there’s the “lab-leak hypothesis” that Chinese virologist Dr. Li-Meng Yan exposed. If the lab-leak theory proves to be true, the pandemic caused by Covid-19 is the result of experiments in a lab in Wuhan China. The fact is that China’s Wuhan Institute of Virology (WIV) is within a few miles of the live animal market where the first outbreak of Covid-19 was detected. It is widely believed that the Chinese scientists at the WIV were conducting experiments to genetically modify bat viruses to make them infectious to human beings. Watch this 9 1/2 minute clip as Tucker Carlson presents information that (prominent science writer) Nicholas Wade published on Medium. Carlson goes on to provide evidence that the experiments were funded by American tax dollars. After exposing how this happened, Tucker Carlson asks “So, why isn’t there a criminal investigation into Tony Fauci’s role in this pandemic?”

For the text version of Tucker Carlson’s May 10th segment on Dr. Fauci, check out this post on RealClearPolitics.com.

Rand Paul and Dr. Fauci Spar at Senate Hearing over Wuhan Lab & the Origin of Covid-19

This is the day after Tucker Carlson implicated Dr. Fauci in funding the Wuhan Virology Institute in China and already Rand Paul is questioning Anthony Fauci at a Senate health committee hearing. This isn’t the first time Paul and Fauci have butted heads in Senate meetings (and I doubt it will be the last). It was on March 18th that Rand Paul accused Anthony Fauci of not following the science. In case you missed that one, you can catch it here on Laura Ingraham’s segment “The Left’s Covid Control Scheme”.