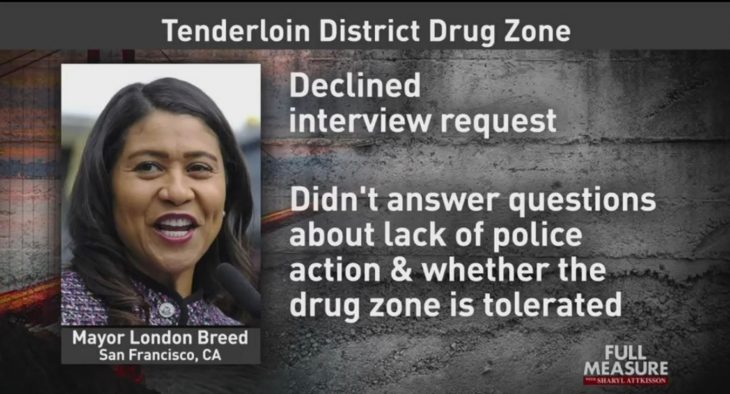 In fiscal year 2021–22, San Francisco’s homelessness budget was $1.1 billion dollars. In spite of this enormous spending, San Francisco is one of the most dangerous American cities to live in. The historic ‘Tenderloin‘ district was once famous for trendy jazz clubs, restaurants, art and historic theaters. Now, it’s infamous for being an open-air drug market. The situation is so dire that San Francisco Mayor London Breed declared a state of emergency last December. (Note however that the San Francisco Board of Supervisors included a stipulation that the emergency funding could not be used for more police funding.)

Sharyl Attkisson and her crew filmed the tent village in the Tenderloin. Originally erected to house the homeless, it is now used by drug dealers to hide their transactions. Each of these tents cost the city approximately $60k per year. (That’s twice the rent of a typical one bedroom apartment!) Attkisson also noted that there weren’t any uniformed police officers in sight. Many people believe that San Francisco city officials for intentionally using the Tenderloin district as a “drug trade containment zone” to keep the drugs from spreading. Watch her investigation and you decide:

Source: Full Measure with Sharyl Attkisson on May 8, 2022