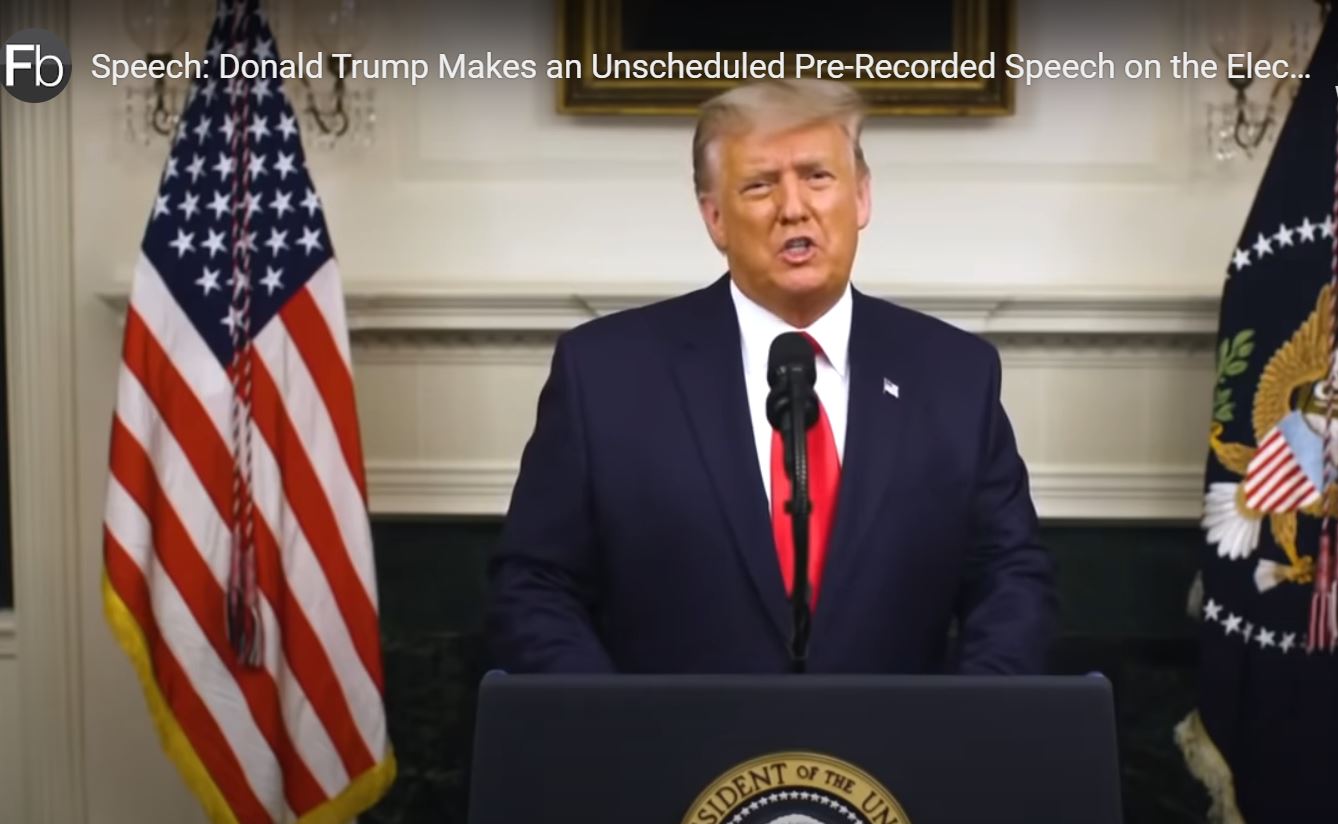 On December 2, 2020, President Donald Trump released an unscheduled, pre-recorded speech about why he believes the 2020 election was stolen. His opening statement was “This may be the most important speech I’ve ever made”. In his speech, President Trump explains why he believes there was election fraud and irregularities in the five swing states. President Trump posted the original 46-minute long video on his Facebook page at 2:36pm EST, The video below was archived to YouTube. We all know that the social media giants (along with mainstream media) are censoring our news. So, hopefully you can watch and share this video before it’s removed. You can also access the transcript on Rev.com.

Our mainstream media continues to suppress the news about the election and voter fraud that occurred in the five key swing states. Many Americans are still unaware that our ballots were processed by a Venezuelan owned company, based in Barcelona Spain, using Dominion Voting System ballot tabulating software (a Canadian company) and processed on an unsecured computer server in Frankfurt Germany. (The evidence is out there. You’re just not going to hear or read about it on mainstream media.)

BTW – Kudos to our President for using social media to share the information that we need. If I didn’t follow President Trump @realDonaldTrump on Twitter, I may have never seen that video! IMHO, the Arizona Republican Party did a good job of summing up the “middle of the night ballot dumps, glitches and secret vote counting” in the swing states . It’s also a good summation of Dominion Voting Systems. (Believe me, there is plenty of supporting evidence to prove these claims of election fraud.)

Notice the warning from Twitter that “This claim about election fraud is disputed”. This is just one more example of what Conservatives are up against. This has been going on for a long time! Remember back in September when Tucker Carlson was censored by Twitter and Facebook for reporting on mail-in-voting fraud? The odds are stacked against us. There’s no doubt in my mind that President Trump was re-elected legally. Unfortunately, time is running out and the deep state crosses party lines. Even Attorney General Bill Barr, the DOJ and the FBI aren’t investigating these allegations of election and voter fraud!

If you haven’t had a chance yet, check out my post Mainstream Media Does NOT Want you to See this Video. and watch Sydney Powell and Rudy Giuliani as they paint a picture of an election that was influenced by Communist money including Venezuela, Cuba and “likely” China. The good guys need our help. It’s up to us to spread the truth. We need to stop election fraud now. We may never have another chance again.