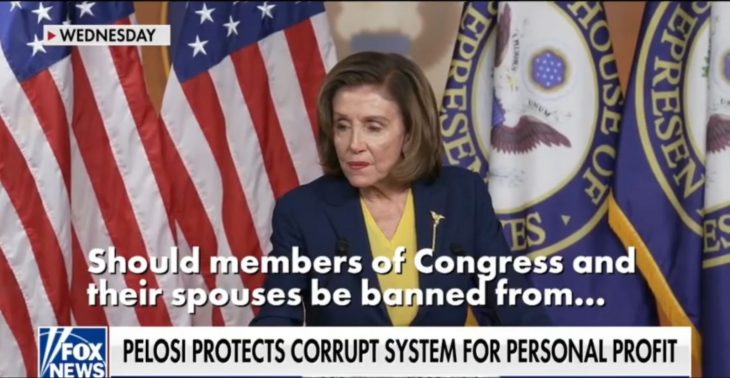 Our Congressmen are getting rich investing in the stock market. While Nancy Pelosi earns in the low six figures, she and her husband Paul have a net worth estimated to be approximately $315 Million. In a Fox News investigation, Jesse Watters revealed that, (as a Washington insider), Nancy Pelosi always seems to time the stock market perfectly.

In 2008, the Pelosi’s were involved in the VISA IPO insider stock trading scandal. In January 2021, (right before Biden announced his support for electric vehicle subsidies), Paul Pelosi purchased $1 million in Tesla call options, In March 2021, the Pelosi’s exercised $2 Million of options to purchase Microsoft stock. In June 2021, Paul Pelosi exercised options on Google‘s parent company Alphabet (which made him $5.3M).

A recent investigation reveals 52 members of Congress and at least 182 congressional staffers have violated the ‘Stop Trading on Congressional Knowledge Act of 2012‘. This law was designed to stop insider trading and prevent conflicts-of-interest among members of congress.

Recently, a reporter asked Nancy Pelosi “Madam Speaker, Insider just completed a five-month investigation finding that 49 members of Congress and 182 senior Congressional staffers have violated the STOCK Act, the insider trading law,” he said. “I’m wondering if you have any reaction to that? And secondly, should members of Congress and their spouses be banned from trading individual stocks while serving in Congress?”

Nancy Pelosi’s reply was “No. We have a responsibility to report stock. This is a free market and people. We’re a free market economy and people should be able to participate in that.”

WATCH as Mark Levin tells Jesse Watters that what is happening now is institutionalized corruption. Before the pandemic, Congressmen were trading Pfizer, J&J and Moderna shares. Members of the military committee are buying stocks of defense contractors and Democrats are investing in fossil fuel companies. Levin told Watters: “They pass these bills where trillions and trillions of dollars. By the time anybody figures out what’s in it, it’s too late or they’re retired.”