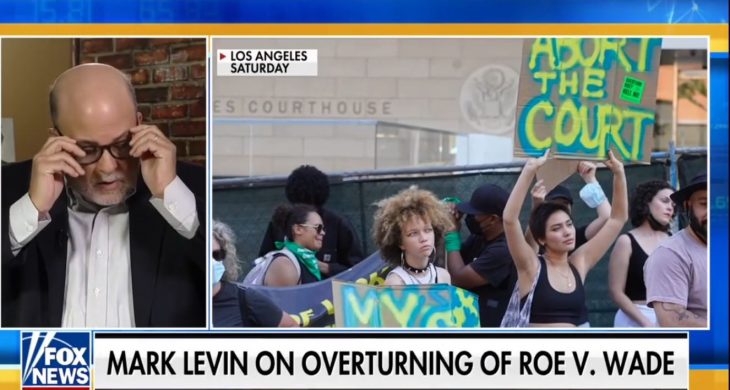 Constitutional law expert Mark Levin walks Maria Bartiromo‘s audience through the Supreme Court ruling on Roe vs Wade. Levin begins by blasting President Biden, the mainstream media, Nancy Pelosi and Chuck Schumer for not reading the SCOTUS decision and then for lying about it, Levin confirms that the word ‘abortion’ doesn’t appear anywhere in the Constitution of the United States. Then Levin goes on to say “Here’s the deal. …”

“Here’s the deal. Really, Roe vs. Wade wasn’t overturned. Roe vs. Wade was fundamentally altered by a decision in 1992 — Roe was 1973 — called the Casey decision in Pennsylvania, which changed the trimester test and had the undue burden and viability test, which they basically stole from Europe and from other kinds of laws we have in this country.”

“The Supreme Court has been shooting from the hip on abortion now for about half-a-century. And that’s why you have all these cases keep working their way to the Supreme Court from federal district courts, and so all these pro-abortion groups constantly litigating to prevent the states from having any regulation whatsoever.”

“And let’s be clear about what this decision says. This decision says something really unique in American history. We have a very, very powerful body, the Supreme Court, saying, we don’t have any power. When’s the last time you heard Congress or the president or the bureaucracy say, we don’t have any power, so we’re going to give this authority where it belongs, back to the people in the states?”

Transcript of Conversation Between Mark Levin and Maria Bartiromo