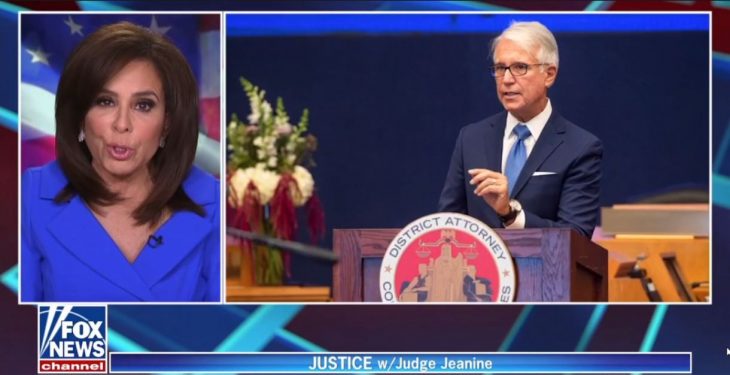 On September 16 2020, I watched as former Speaker of the House Newt Gingrich was cut off during an interview on “Outnumbered” (on Fox News). Gingrich had dared to expose the fact that billionaire George Soros was helping to fuel the riots in multiple U.S. cities by donating to efforts to elect left-wing, anti-police, pro-criminal district attorneys. Well, those pro-criminal District Attorneys are alive and well in blue states like California. Watch this 7-minute clip as Judge Jeanine Pirro first speaks with the mother of a murder victim who is being paroled by Pro-Criminal Los Angeles DA George Gascon’s office. Then watch as Judge Jeanine asks California Congressman Darrell Issa “Is George Sorros funding all of these campaigns?” His answer is “Yes. He is.”

Representative Issa goes on to explain that there is a movement by George Soros to put in district attorneys that are “not just soft on crime, it’s almost criminal denial”. Issa also tells Judge Jeanine that “There’s never been such a classic example of where George Soros’s bad policies immediately turned into violent criminals back on the streets. Violent criminals not getting prosecuted as we speak.” Congressman concludes by warning all of us that the policies in California often spread to the rest of the United States.