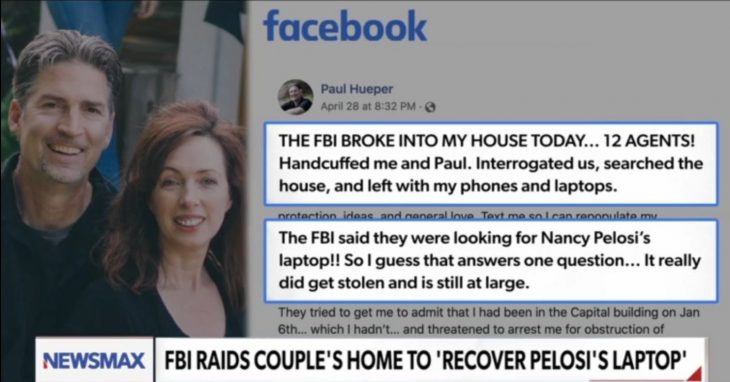 Since the Capitol riot on January 6th, 2021, the FBI has targeted Trump supporters under the guise of identifying domestic violence extremists. (Remember when Bank of America turned customer data over to the FBI to help identify customers who went to Washington D.C. for the Trump rally on January 6th?) This April, FBI agents raided the home of Marilyn and Paul Hueper in Homer Alaska. They were searching for Nancy Pelosi’s laptop. The FBI’s accusations were based on a Facebook post that identified Marilyn Hueper as having been present at the Capitol on January 6th. However, even to the untrained eye, the photo of the woman the were looking for is clearly not that of Hueper.

In her interview with Grant Stinchfield (on Newsmax TV), Marilyn Hueper told Stinchfield “They did come storming into the house and they chose to hold us at gunpoint and chain us up (in our own home) and then assure us that they were going to make all things clear soon.” Stinchfield (and many others) strongly believe that the Biden administration is weaponizing both our FBI and our DOJ. Let us not forget that on January 6, 2021, Trump supporters gathered to peacefully challenge the electoral college votes. President Trump did not incite his supporters to be violent. If you have any doubt, watch the video of President Trump’s address to American Patriots. Twitter deleted his tweet January 6th and two days later, Twitter permanently suspended his account.