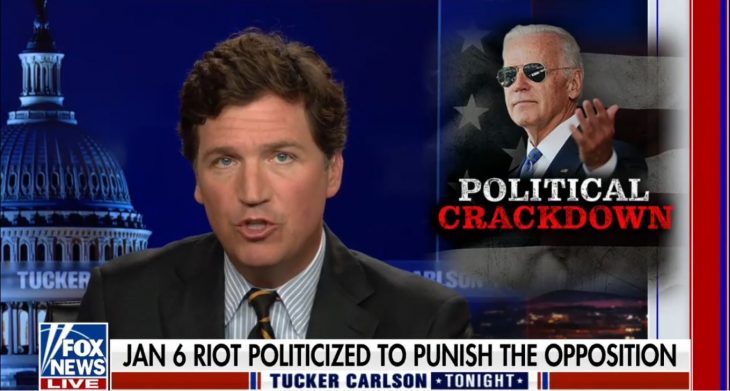 Tucker Carlson opened his June 15th show with a report of a racially motivated shooting spree in Georgia that resulted in the death of 5 people in 2 states. This crime was motivated by “race hate“. All five victims were white males. Tucker explained we won’t hear about this crime on mainstream media because it doesn’t fit the “white supremacy” narrative. Then, Tucker ran the video of President Biden stating that “terrorism from white supremacy is the most lethal threat to the homeland today. Not ISIS. Not Al-Qaeda… White supremacists”. The next clip shows U.S. Attorney General Merrick Garland telling us: “In the FBI’s view, the top domestic violence extremist threat comes from racially or ethically motivated violent extremists, specifically those who advocated for the superiority of the white race”. This is followed by Vladimir Putin questioning the death of Ashli Babbitt and pointing out that the Capitol protesters were there for “political demands”. The logical questions are: Why doesn’t the FBI release the (more than 10 thousand hours of) surveillance tapes and What is the name of the person who killed Ashli Babbitt?

Tucker then references Revolver News reporting and said “…upwards of 20 unindicted co-conspirators in the Oath Keeper indictments, all paying various roles in the conspiracy, who have not been charged for virtually the exact same activities…” Court filings by the Biden administration show that law enforcement officers participated in the Capitol riot. Tucker then asks why Capitol protestors, (who were charged with trespassing) are being detained in solitary confinement in a D.C. jail while Biden voters (who torched federal buildings) walk free. (Note: The D.C. jail that the protestors are being held in is used exclusively to house Capitol detainees.)

Rep. Matt Gaetz on the FBI’s Involvement On January 6

In an interview on “Cortes & Pellegrino” (NewsMax TV), Congressman Matt Gaetz (R-FL) collaborates Tucker Carlton’s narrative that the FBI might have had a role in “organizing and participating” in the January 6th Capitol riot. Congressman Gaetz is one of five Republicans who sent a letter to FBI Director Christopher Wray questioning the detention and treatment of January 6th protesters. One of these detainees is an 80-year-old decorated Vietnam War veteran and longtime Defense Department employee.

Not only does Gaetz demand to know what the FBI knew and when they knew it. In his interview, Gaetz says “And so it’s reasonable to ask whether or not the FBI is engaged in a playbook where first they infiltrate an organization and then they try to bring that organization to the point of criminal conduct as a mechanism as to try and bring it down.” In closing, Gaetz summed up “I think that the FBI has morphed into a political opposition research organization and a political activism organization more than a law enforcement organization.”