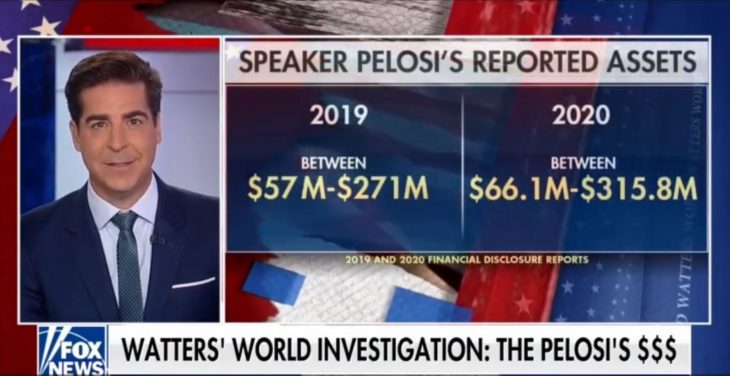 Speaker of the House Nancy Pelosi has become one of the richest members of congress. Yet, she earns in the low six figures. Jesse Watters, host of ‘Watters’ World’ on Fox News asks “What’s her secret?” Watters doesn’t accuse Nancy Pelosi of using her position in Congress for personal profit. But during his investigation, Watters provides his audience with a substantial amount of evidence to support that assumption.

After marrying Nancy, Paul Pelosi opened up a real estate and venture capital firm. Paul then used his connections to help Nancy Pelosi launch her career in politics. In 1987, Paul Pelosi helped Nancy get elected. As Jesse Watters explains to his audience “The couple has timed the market perfectly over the years, while Nancy has been a Washington insider. Real estate. Stock. The Pelosi’s always know what the right investment is.”

There was the incident in 2007 when Visa used lobbyists to circumvent swipe fees. (Fees that could potentially have cost them billions.) Then in 2008, the Pelosi’s purchased 5,000 shares during Visa’s IPO (Initial Public Offering). The Pelosi’s purchased those shares at the initial price of $44 dollars. Two days later, it was trading at $64.

In March of this year, “Paul Pelosi exercised $2 Million of Microsoft options just 2 weeks before the tech giant got a $22 Billion contract to equip the US army with high-tech headsets.” In January, Paul Pelosi purchased $1 million in Tesla call options right before Biden announced his support for electric vehicle subsidies. In June, Paul Pelosi exercised options on Google‘s parent company Alphabet which made him $5.3M.

Peter Schweizer, President of the Government Accountability Institute (GAI) had this reaction:

“The bottom line Jesse is we don’t mind if people make money with investments. The question is ‘Is it wedded to your political power?’ And, in the case of the Pelosi’s, they not only got that VISA IPO stock, they participated in at least 10 (uh) IPO stocks. And these are unusual. These basically go to company founders and insiders. The fact that a politician’s family is allowed to participate in an investment (that generally doubles in value when it goes public often) is a real indicator that there’s a problem.”

Peter Schweizer also told Jesse Watters that Nancy Pelosi steered $200 Million in federal funding to build a light railway system within two blocks of a building the Pelosi’s own in San Francisco. This doubled the value of their building. And on it goes.

More Posts Based on Research by Peter Schweizer:

Is Mitch McConnell another United States Politician with Financial Ties to China?