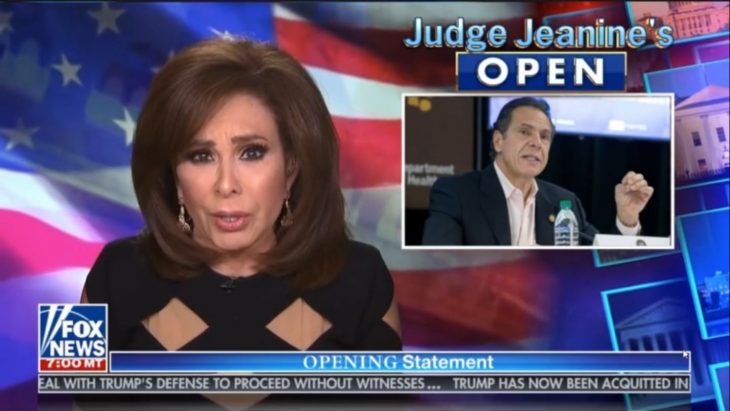 In a video conference with Democratic politicians, Melissa DeRosa, (New York Governor, Andrew Cuomo’s top aide), confessed that the Cuomo administration withheld the number of Covid-19 deaths in New York nursing homes. DeRosa’s admission to the cover-up attempted to put the blame on President Trump. In the audio tape, DeRosa told lawmakers that both President Trump’s tweets and his directing the Department of Justice to investigate, forced Governor Cuomo to hide the nursing home data.

According to Judge Jeanine Pirro (in her February 13, 2021 episode of “Justice with Judge Jeanine”), this admission by Melissa DeRosa can be used as evidence in a court of law. In Judge Jeanine’s opening statement, she minces no words on her description of Cuomo as “. . . a bully not only to those he sees as a threat politically but to the little people for whom he has zero allegiance.” Pirro goes on to explain why she believes Cuomo knowingly sent Covid-19 infected patients into nursing homes putting our most vulnerable citizens at risk. In effect, sentencing them to death.

What are your thoughts? Do you agree with Judge Jeanine Pirro that Governor Cuomo was aware he was sentencing these innocent victims to death? Pirro pointed out that one of Cuomo’s biggest financial contributors are the health care industry and lobbyists. Was Cuomo’s mandate intended to make more room in the hospitals for patients with better insurance? New York state Attorney General Letitia James recently released a report confirming that the number of Covid-19 deaths in New York nursing homes may be 50-percent higher than officials claimed. As Judge Jeanine says “Politicians have gone to jail for far less.”