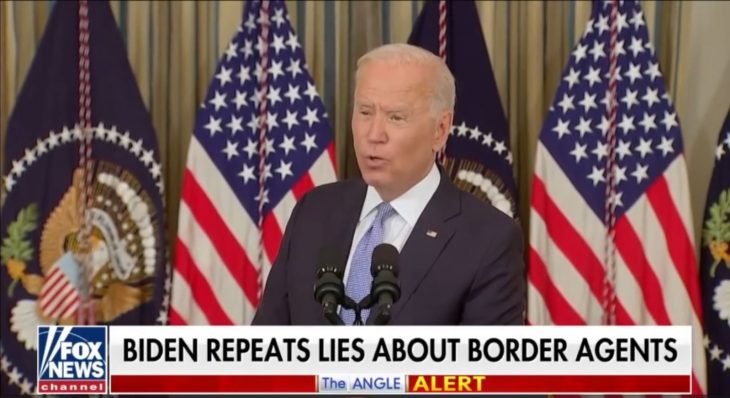 We’ve seen the pictures of thousands of Haitian migrants under the Del Rio Bridge in Texas. More than 15,000 Haitian migrants were waiting to be “deported“. It turns out that the vast majority of them weren’t deported after all. Homeland Security Secretary Alejandro Mayorkas has admitted that (at least) 12,000 of those Haitian migrants were released into the U.S. (without being either tested for Covid or vaccinated).

So, what has the Biden-Harris administration done to protect American citizens? Nothing. President Biden refuses to accept responsibility for causing the US-Mexico border crisis. Instead, Biden has accused the Texas border patrol agents of whipping Haitians as they were crossing illegally. The National Border Patrol Council (NBPC) adamantly denies that the Border Patrol agents on the Horse Patrol hit anyone and insists that they were only doing their job. Paul Ratje, the photographer who took the viral photos, went on record saying “I’ve never seen them whip anyone”. In fact, the ‘whips’ were reins that were used to steer the horses away from the Haitians.

Watch as Laura Ingraham blasts the Biden-Harris administration for the border crisis, the botched pull-out from Afghanistan and Biden’s decision to override the CDC’s recommendations on Covid-19 vaccine boosters. Ingraham also calls out President Biden for failing to properly execute the Covid-19 vaccine rollout and Biden’s plan to hire more IRS agents to monitor our bank accounts.