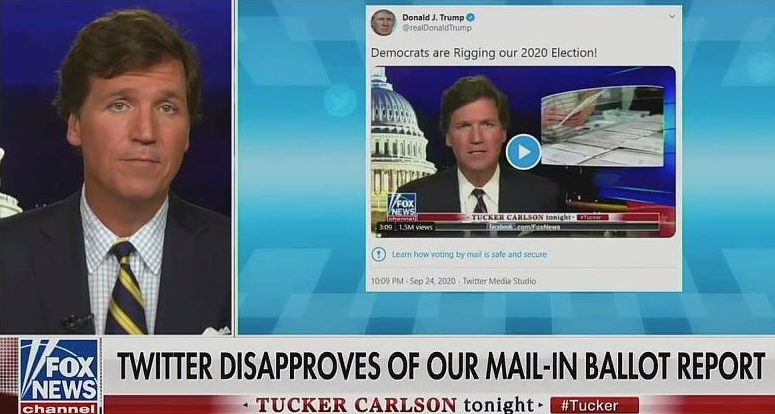 Tucker Carlson, the conservative political commentator and host of the Tucker Carlson Tonight show on the Fox News Network was censored by Twitter for a show where he demonstrated numerous examples of mail-in ballot fraud. Tucker’s examples of ballot fraud took place in West Virginia, New Jersey, Pennsylvania and Wisconsin. President Donald Trump tweeted about Tucker Carlson’s monologue and Twitter posted a FACT-CHECK “Learn how voting by mail is safe and secure” on President Trump’s tweet.

Democrats are Rigging our 2020 Election! pic.twitter.com/1FwrJiuSNY

Basically, Tucker Carlson summed up what other electoral and constitutional lawyers have already said. Nancy Pelosi, the Democrat party and mainstream media are pushing to implement Universal Mail-In Voting in the hopes of delaying the 2020 election results. Twitter knows that mail-in voting will increase the opportunities for fraud. What they don’t want is for us to know that.

Facebook, “another huge tech company”, censored Tucker Carlson for his coverage of the origin of the Coronavirus. They blocked the content on his page and virtually shut down his traffic. Facebook later apologized for “mistakenly” blocking him and they removed the ban.

Earlier in the week, Twitter had also “accidentally” flagged a video of Tucker Carlson. That one was about the millions of dollars George Soros is spending to get far left progressives elected into the district attorney’s office.

Censorship by social media platforms like Facebook and Twitter has been going on for years. These companies are influencing our 2020 election by censoring conservatives. Learn more about censorship and the Free Speech America movement to help stop Big Tech censorship of conservatives.