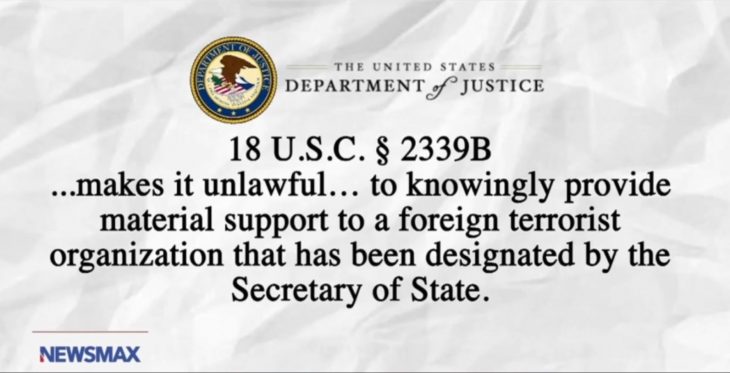 President Joe Biden abandoned billions of dollars of US military equipment to the Taliban. Terrorists in Afghanistan are now in possession of US weapons that possibly include up to 600,00 assault rifles, 2,000 armored vehicles and 40 aircraft (including Black Hawks).

In the September 10th segment of Greg Kelly Reports, Kelly references a U.S. Department of Justice law that states “. . . makes it unlawful. . . to knowingly provide material support to a foreign terrorist organization that has been designated by the Secretary of State.” The Taliban is a foreign terrorist organization. Greg Kelly closes with “600,000 weapons. Sounds like that could be a high crime or misdemeanor that Joe Biden may have committed.”

President Biden knew that the Afghanistan army was not going to be able to protect Kabul from a Taliban takeover. The phone transcript of the July 23rd phone call between Joe Biden and Afghan President Ghani reveals that at least 10-15,000 international terrorists were invading Afghanistan.

Rather than send reinforcements, President Biden abandoned Bagram Airfield base and let Kabul fall. Biden evacuated the US military and left American citizens and our allies behind. President Biden also left billions of dollars worth of military equipment. And let’s not forget the hand-held scanners and access to a US-built biometric database that the Taliban is now using to hunt down and kill Afghans. President Biden is responsible for leaving those behind for the terrorists too.