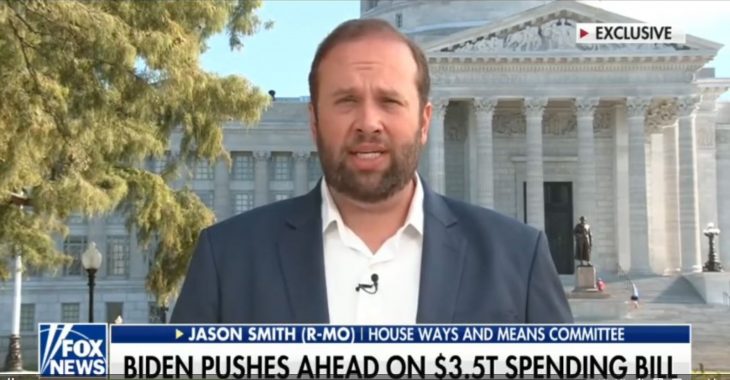 On August 24th, Washington Democrats approved a $3.5T budget resolution. This process lays the framework for the Democrats’ to proceed with their plans for a massive social spending bill. Representative Jason Smith (R-MO), ranking member of the House Budget Committee, issued this statement that explains how a budget reconciliation bill avoids a direct vote (which the Democrats did not have).

In the two weeks since this bill passed, 13 House committees have been “marking-up” their respective pieces. This “marking up” is part of the budget reconciliation process and understanding how it works gives a clearer picture.

Watch as Representative Jason Smith explains to Maria Bartiromo how “The tax and spending bill we have before us is the largest spending bill that will ever be taken up in the history of this country. They say it’s 3 and a 1/2 trillion dollars of spending. What has happened after the last 2 weeks amongst the 13 committees, actually has $4.3T of direct spending but because of using budget gimmicks. it’s actually 7 to 8 trillion dollars worth of spending.” Even worse is the $2.1T of tax increases. Representative Smith goes on to say that the tax increases will be so high that U.S. job creators will have a higher tax burden than those in China.

House Reconciliation and $3.5T Spending Bills are Tied Together

After the break, Maria Bartiromo asks Congressman Jason Smith “How does the 7 to 8 trillion dollars come about?” Representative Smith’s response was that, in addition to the $4.3T in direct immediate spending, the Democrats are using what he refers to as budget gimmicks and budget tools. We’re in trouble folks. Watch for yourself and then please spread the word and call your representatives.