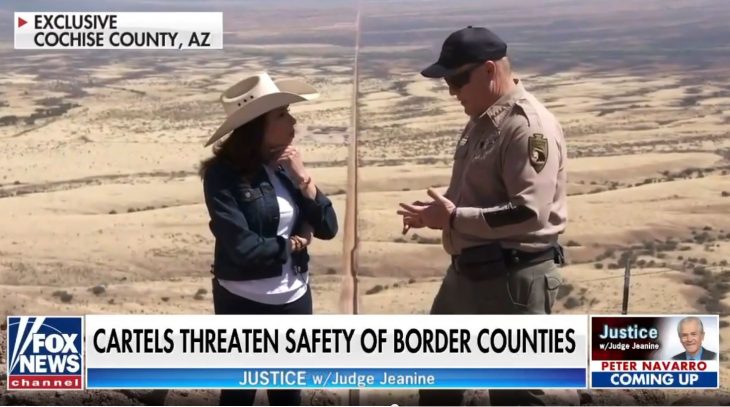 On his first day as President, Joe Biden signed an executive order to terminate the construction of the U.S.-Mexico border wall. Cochise County Arizona shares 83 miles of border with Mexico. Watch and listen as Cochise County Sheriff Mark Dannels explains to Judge Jeanine Pirro how stopping construction of the wall has created a crisis at the border. The Sinaloa cartel now use the roads that were left behind to enter the U.S. illegally. Dannels said. “We just built infrastructure for the cartels.” “This is worse now than it was before, there was no infrastructure, but mountains. Now we have holes in our wall.”

Judge Jeanine asked Sheriff Dannels how Arizona illegals compare to the illegal immigrants coming into Texas. His response was “Judge, in our county, we deal strictly with cartel trafficking. The Sinaloa cartel. They have control on human smuggling in this county. They have control over drug smuggling in our county and we see it. It’s a very violent situation we have here in our county with the cartel pushing people through. In the last couple of months, we’ve had a dozen go to the hospital, (Just based on pursuits.) A couple dead. A shoot-out with the smugglers. So, we have a different environment here.”

Sheriff Dannels then said these chilling words: “We’re in crisis mode just off the stats alone. But what should alarm every American in this country, (because what happens here, happens in every community). But what should alarm people more is it’s not what we know. It’s what we don’t know is coming across this border. And I’m telling you, it’s happening every day.” Sadly, Sheriff Dannels summed up the situation by saying “We’re in a global health pandemic but we’re being ignored on the southwest border,” he continued. “It’s almost like we’re not part of America anymore. … What I’m seeing down here is total opposite of what the CDC is recommending. Are we part of this country or are we not?”

For More Insights Into the U.S.-Mexico Border Crisis: