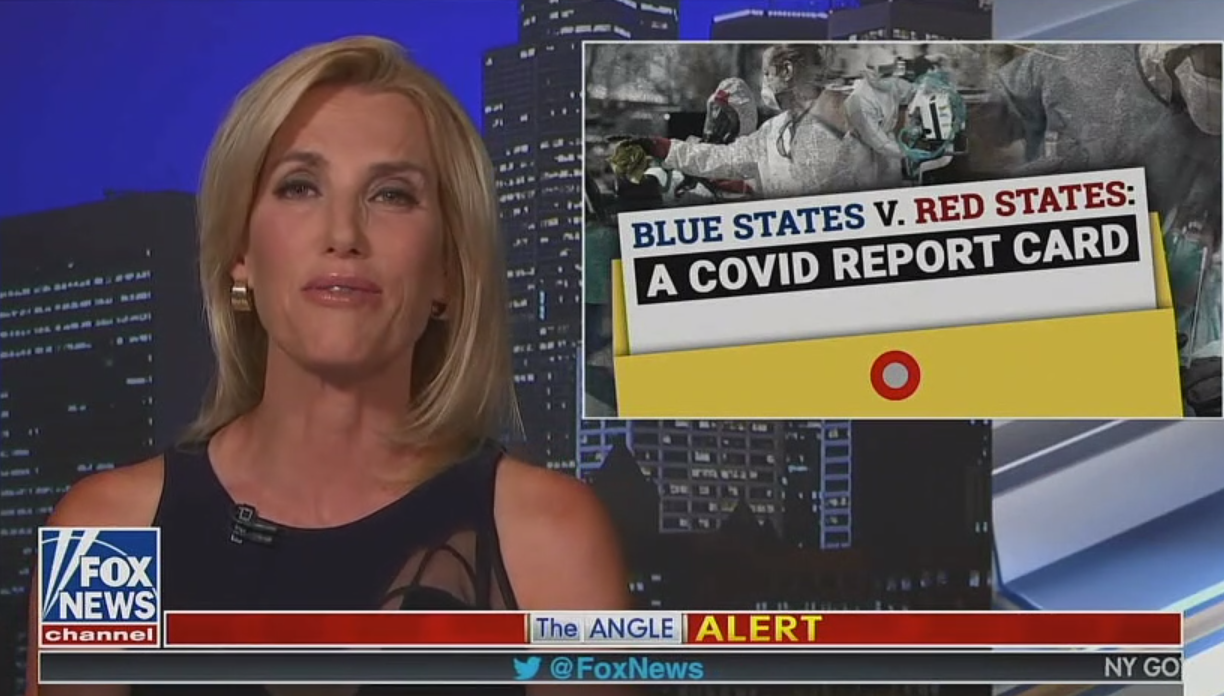 I believe that the Fox News network still has some of the best investigative journalists and political analysts around. In the August 12th episode of “The Ingraham Angle“, Laura presents data showing some of the major differences between the policies invoked in blue states versus red states during the Covid-19 pandemic

There are stark differences between the Covid-19 policies in place depending primarily on the political affiliation of your local government. Watch this 9-minute clip to get a better understanding of how the state you’re living in is affecting your life.

The Republican Response to the Pandemic has resulted in:

The Response from Joe Biden and the Democrat Party Includes:

Joe Biden’s August 11th tweet: “I promise you if I’m elected, I won’t waste any time getting this virus under control. I’ll call Dr. Fauci and ask him to stay on. I’ll bring together top experts from both parties to chart a path forward. We’ll get it done together. “

I’m not sure how you feel about Dr. Fauci but personally, I’m not a fan. He has changed his position on what we should and should not be doing too many times. IMHO I’m not sure that he has our best interests in mind or his. I believe that some of his recommendations are heavily influenced by people who stand to profit from them. (The ongoing debate on hydroxychloroquine comes to my mind.)

The Red States vs the Blue States

Before showing her next graphic (which lays out information you may not have seen before), Laura points out that “for this analysis”:

The governors of all states have been able to set their own policies for the past 5 months. Laura’s observations (which I honestly agree with) are that (generally):

These two graphics of the number of deaths per million are based on data from Worldometers.info.

The graphic above represents a 60% higher death rate in blue states than in red states.

The graphic above ranks the death rate from Covid-19 in both the blue and red states alongside the six European countries. Laura noted that the death rates in both New Jersey and New York are twice that of Belgium (which has the 2nd highest death rate in the world.

Aggressive Lockdowns vs Trusting Americans to do the “Right Thing”

We all need to look at the data and decide for ourselves. Aggressive lockdowns or freedom of choice. You decide. I leave you with Laura’s closing:

“All you suburban women out there, remember this. Voting for President Trump, it doesn’t mean that you like everything he ever said or tweeted or done. It’s a vote for your family, your kids, your community, your freedom and by the way, it’s also a vote for your pre-covid way of life. And that’s the ‘angle’.”

Laura Ingraham’s closing: “All you suburban women out there, remember this.”

What do you think? Do you agree with Laura that Americans need to be free to make their own decisions? Do you think blue states are running their economies into the ground? Do you believe that Democrats are hoping for a national lockdown before the 2020 election?