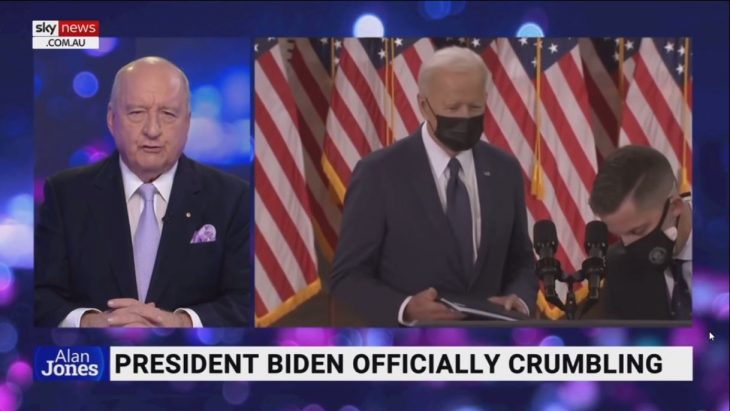 The mainstream media in the U.S. is deceiving us but Australia’s Sky News is not. Watch as TV host, Alan Jones, calls President Joe Biden: “the leader of the world’s democracies, incoherent, having to be propped up physically and intellectually”. After Jones shows the video footage of President Biden stumbling up the stairs of Air Force One, he calls out the mainstream media in the U.S. for not covering the story. As Jones points out, neither MSNBC, CBS News, the Washington Post, the Los Angeles Times or the New York Times posted the story about Biden’s stumble on their websites. In fact, CNN devoted a meager 15-seconds to the story. This is in stark contrast to the mainstream media hysteria that ensued after President Donald Trump slowly descended a ramp (following his West Point graduation commencement speech). CNN devoted 22-minutes to that.

Source: The ‘Trump point’ was proved by media coverage of Biden’s stumbles

Watch the video for yourself and come to your own conclusions. At approximately 3:18 minutes in, (after several more examples of President Biden in action), Jones reports: “This is the President of the United States of America who is illiterate, incoherent, cognitively deficient,” Jones said. “And a leader of the Western world, it is an insult to those who fought for democracy.” Our mainstream media and the big tech oligarchs are censoring our news to protect the Biden administration. The United States of America is in trouble and the world knows it. The Chinese Communist Party (CCP) knows it too and they are elated that Joe Biden was elected as President of the United States.