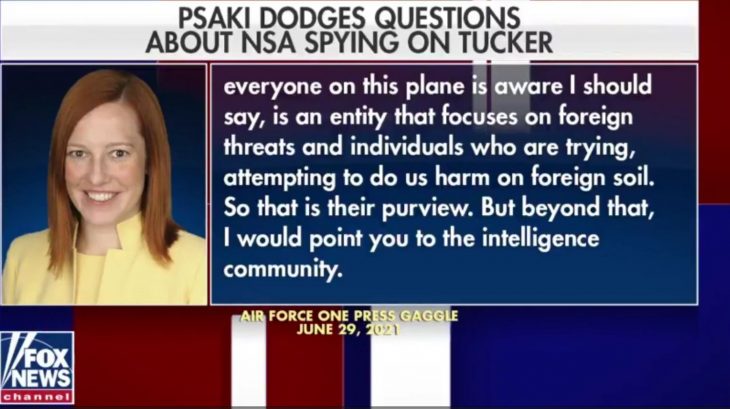 On the June 28th episode of Tucker Carlson Tonight, Tucker openly accused the NSA (National Security Agency) of spying on him. Tucker told his viewers that a whistleblower warned him that the NSA was intercepting his emails and text messages. The whistleblower convinced Tucker that he was being spied on by sharing content from an email that Tucker had sent and that only the recipient should know.

Why would the NSA spy on Tucker? Many people believe that the “Tucker Carlson Tonight” show is being targeted for cancellation. As early as February 12th, Tucker Carlson said “in the last several weeks, and particularly in the last 24 hours, the call to take this show off the air by groups funded—for real—by the Ford Foundation, or by George Soros, by Michael Bloomberg, by Jeff Bezos, has become deafening, going after our advertisers, going after the companies that carry our signal into your home.”

It shouldn’t come as a surprise to anyone that the NSA and the White House aren’t denying Tucker Carlson’s allegations of NSA spying on him. Anyone who watches the Tucker Carlson Tonight show (or who feels the voices of Conservatives are being stifled) understands why Tucker is being targeted. Recently, Tucker Carson accused the Biden Administration of hiding the FBI’s role on January 6th. Before that, Tucker exposed Facebook and Twitter for censoring him for exposing mail-in ballot fraud.

In the eyes of the Biden administration, Tucker Carlson is trouble. Tucker needs to be silenced. And that is why we need him.