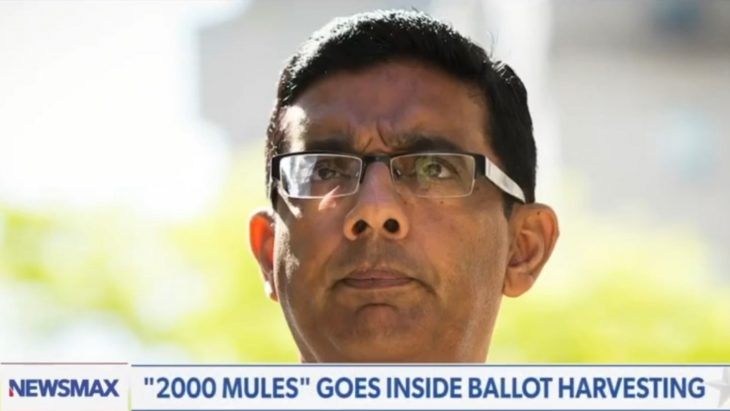 Dinesh D’Souza’s new documentary ‘2000 Mules’ is coming out next week. You won’t be able to see it on Apple, iTunes or Amazon Prime. Why? Because it’s about ballot harvesting during the 2020 election and we live in a time when much of our news is censored. You will be able to see 2000 Mules on what D’Souza refers calls ‘uncancellable‘ platforms. (For example, his 2000Mules.com website.)

D’Souza bases his film on research by the election integrity group True The Vote. This group has exposed suspicious ballot harvesting through the use of cellphone geotracking and surveillance video. True the Vote collected evidence of the ‘mules’ (paid political operatives) collecting ballots and making ballot drops. One of the mules caught on tape made 53 trips to 20 ballot boxes.

As D’Souza explains in his film: “We tracked 2,000 mules making multiple ballot drops. Leaving no fingerprints. Snapping photos to get paid. A coordinated ring of unlawful vote harvesting in all the key states where the election was decided.”

Miranda Devine is a New York Post columnist and author of “Laptop from Hell“. Devine has investigated Hunter Biden and the Biden family’s business deals with China, Russia and Ukraine. This is what she wrote in her New York Post column after she previewed “2000 Mules”:

“The most compelling evidence to date has emerged in “2000 Mules,” the upcoming documentary by conservative filmmaker Dinesh D’Souza, who draws on research by election integrity group True The Vote to expose suspicious ballot harvesting.”

Miranda Devine – “Are Democrats and Joe Biden up to their old election tricks?” published April 24, 2022